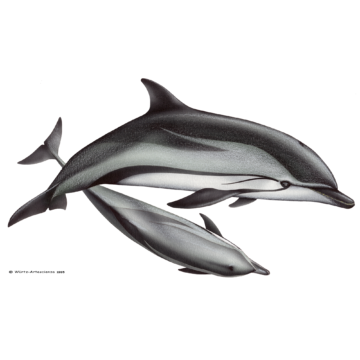 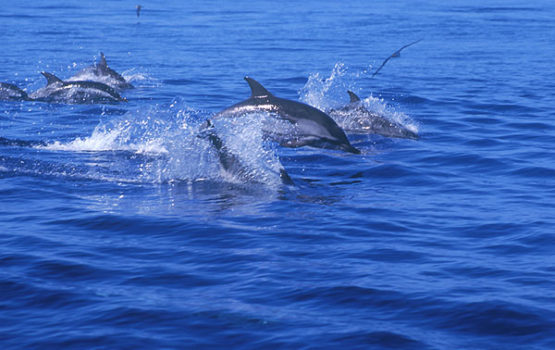 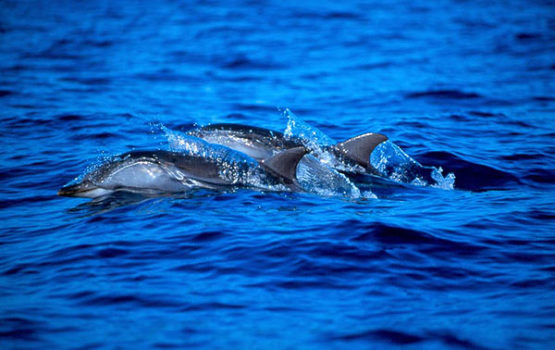 Striped dolphins are about 1m long at birth. Adults can grow to 2.6m long, and weigh about 156kg. There are 40-55 pairs of slender, pointed teeth in each jaw. Life span is estimated to be almost 60 years.
The striped dolphin is a small, robustly built dolphin. They have a three-part colour pattern: a dark grey dorsal cape, which appears bluish-grey; light grey sides with a distinct spinal blaze that curves upward beneath the dorsal fin; and white or pinkish abdomens. The mostly-black beak is moderate in length. There is a dark stripe which encircles the eye and then widens and runs back to the anus, as well as a dark eye-to-flipper stripe. The dorsal fin is tall and strongly falcate, situated at midback.
Small fish and cephalopods seem to be the preferred prey items taken by striped dolphins. They are thought to be capable of diving 200-700m to obtain prey. Most groups seem to vary between a few dozen individuals to a few hundred, however groups of thousands have been reported. They assemble in groups of both sexes and several age classes, and also in mixed species groups, often in the company of short-beaked common dolphins (Delphinus delphis) and Atlantic spotted dolphins (Stenella frontalis). Calving takes place year-round after a gestation period of 12-13months. Striped dolphins are fast swimmers, and they are well known in some regions for their habit of avoiding vessels in high splashy leaps, at high speeds. In other regions, they are frequent bow riders of large and small vessels. They are very acrobatic, performing frequent breaches and other aerial manoeuvres.

This is a widely distributed species found in all oceans in tropical and temperate waters. Striped dolphins are generally restricted to oceanic regions and are seen close to shore only where deep water approaches the coast. They can be confused with other small delphinids, similar in size and shape, at a distance. The short-beaked common dolphins have a darker, almost black back, as well as a unique hourglass colour pattern of yellow, light grey and white. The juvenile Atlantic spotted dolphins have the same colouration and the spinal blaze present on striped dolphins, but they lack the eye-to-anus stripe. Also, adult spotted dolphins should be recognised by their mottled pattern.
Striped dolphins are one of the resident species of dolphins in the Azores. They are present more or less constantly throughout the season, on average in 28% of our trips. We encounter them more frequently though, further away from shore.