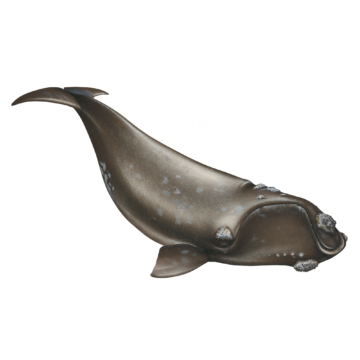 Newborns North Atlantic right whales are about 4.5m long with almost 1ton of weight. Longest record is of 17m for this species, with males usually 1-1.5m smaller than females. Maximum weight is about 90tonnes. The baleen plates number 220 to 260 per side and are very long (3m), narrow, and black, with a fine inner fringe. Life span is known to exceed 70 years.
The large and robust body is immediately recognized due to the lack of dorsal fin. They are black with a small white pattern on the ventral side. Right whales have a very wide back and paddle-shaped flippers. The head is large and the mouthline is strongly arched. The head and rostrum are covered with callosities, areas of roughened skin to which whale lice attach. The flukes are triangular and large, with smooth margins. They have a distinctive up to 5m high, V-shaped blow when seen from the front or from behind.
Northern right whales are feeding exclusively on plankton, subsisting on copepods and krill. They feed by slowly skimming, moving through the water open-mouthed and constantly filtering prey. Like other mysticetes, northern right whales occur alone or in small (less than 12), temporary associations. They are very slow swimmers. They can show aerial behaviours such as tail slaps, and breaches, and they generally raise their flukes before a dive. They are reported to show curiosity towards boats and often approach them.

Nowadays, Northern right whales occur mostly in coastal and shelf waters. The North Atlantic right whales occupy waters of Cape Cod in winter and spring, as well as off the coasts of Florida and Georgia, in winter. They are seen in the Bay of Fundy and the Scotian Shelf in summer months. The species is now very rare in European waters, where they were once abundant pre-whaling days. It is easy to distinguish this species due to the lack of dorsal fin or hump; the only other large baleen whale which lacks a dorsal fin is the bowhead whale (Balaena mysticetus), however the habitats don’t overlap.
This species hasn’t been observed by the Espaço Talassa team. However, on January 5th, 2009 there was an adult female, about 15m long observed south of Pico, spotted by the lookouts and confirmed by the University of the Azores’s researchers. This individual was known from the North Atlantic Right Whale Catalogue, as being individual “3270”, observed for the first time in June 2002 in the Great South Channel (USA) and in September 2008 in the Bay of Fundy. In September 2009, this female had returned to the Bay of Fundy, and at the moment, it was observed for the last time in June 2011 in the Great South Channel after spending some time that winter in Florida. This was the first confirmed record of this species since 1888, year when the last North Atlantic right whales was hunted in Azorean waters.