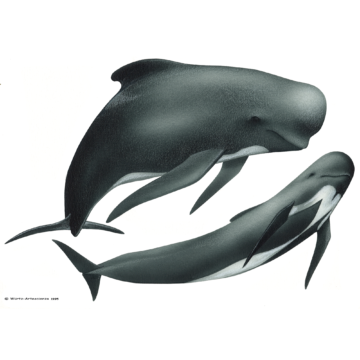 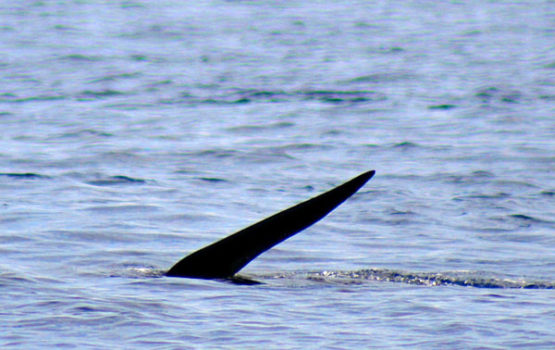 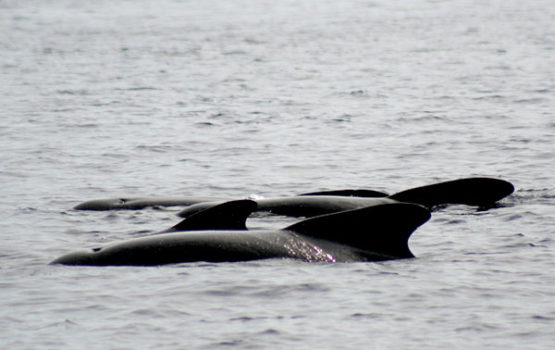 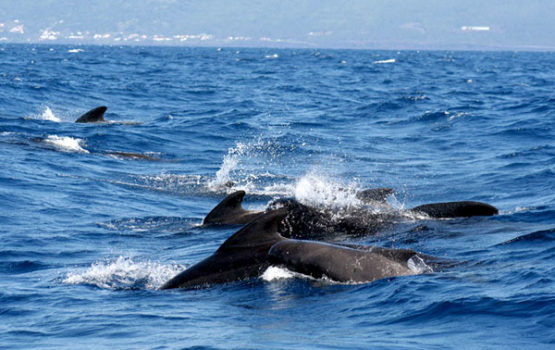 Long-finned pilot whales are about 1.8m long and weigh about 75kg, at birth. Adult males can grow to 6.7m long, while females usually reach only 5.5m. Average weight is about 2300kg (males) and 1300kg (females). There are 9-12 pairs of sharp, pointed teeth in each jaw. Lifespan is, at least, 60 years for females and only 45 years for males.
The long-finned pilot whale has a long but robust body. The colouration of the body is basically dark grey or brown to black. There is usually a white or light grey stripe behind the eye, extending back up to the dorsal fin. There is also a light grey or white saddle on the back behind the dorsal fin. On the belly, they also hold a white or light grey anchor-shaped patch. The melon presents a globe shape and can overhang the front of the mouth. There is a very short, barely visible, beak. The dorsal fin is characteristic for the pilot whale’s species: set anteriorly, it’s long and wider at the base relative to its height, it rises at a shallow angle, and it’s falcate in shape. The males have larger dorsal fins than females and it is not uncommon for the adult male’s long-finned pilot whales to have a hump just before the dorsal fin. The pectoral flippers are long (about ¼ of the total body length).
In the North Atlantic, long-finned pilot whales feed mainly on squid and mackerel. These dolphins probably take most of their prey at depths of 200-500m deep. School size is difficult to assess because it’s proven that they live in stable, maternally-based groups, probably around 10-20 individuals. However, they can be seen in groups of hundreds, as observed in mass strandings of these dolphins. Breeding of long-finned pilot whales can occur at any time of the year. Gestation last about a year, and lactation lasts for up to two years. The behaviour of long-finned pilot whales near the surface varies from quiet rafting or milling to brief moments at the surface alone or in the presence of their young. These dolphins often spyhop but rarely breach or bowride.

The range of the long-finned pilot whales is circumpolar in the southern hemisphere and boreal and subarctic in the North Atlantic, ranging south to Madeira and the western Mediterranean Sea. They are absent from the North Pacific. In areas where the range overlaps with that of short-finned pilot whales (Globicephala macrorhynchus), it can be difficult to distinguish between the two species. The long-finned pilot whales tend to be darker, with a small saddle behind the dorsal fin. They are usually friendlier towards boats compared to short-finned pilot whales. Due to the size difference of the pectoral flippers, the easiest way to distinguish between these two species is when the flippers are observed.
This is a rare species for the Espaço Talassa team. They were positively identified for the 1st time on May 4th 2007, 3miles south of S.João and since then we have a few occurrences of the species every two-three years.