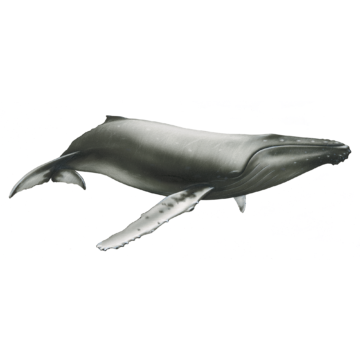 Adult humpback whales reach about 17m in length, with males slightly shorter (less 1m) than females. Their weight can be close to 40tonnes. Newborns are 4.5m long and weigh about 680kg. There are 270-400 baleen plates on each side of the mouth, which are mostly black in colour. The life span is unknown, but probably around 60years.
Humpback whales have a large and robust body. The coloration is black or dark brownish-grey above, and mostly white below, in the southern hemisphere. The head and lower jaw have a variable number of rounded protuberances (known as tubercles). The ventral pleats (14-22) extend to the umbilicus, fewer and wider than the other rorqual species. The long narrow flippers are approximately 1/3 the length of the body. The colouration of the flippers is mostly white on both sides in the North Atlantic and southern hemisphere, but there is a huge variation on the individual level. These flippers very often have a series of bumps along the leading edge. The dorsal fin, located two thirds of the way back, varies greatly between individuals. Sometimes it’s absent, sometimes it’s large and/or high; usually it is located on a hump, very noticeable when the whale arches its back prior to a dive. The tail flukes have a serrated trailing edge. The ventral side of the fluke can vary between all dark to all white, or most frequently, a combination of the two. Together with the unique trailing edge, this colouration is used to distinguish between individuals. The blow is often low and bushy.
Humpback whales feed on krill and a variety of small schooling fish. They feed alone or cooperatively, lunging into schools of prey. Humpbacks are typically observed alone or in small unstable groups. They are the most acrobatic of baleen whales and often they breach, lobtail and flipper slap. Sometimes they even spin in the air while breaching. They also raise their flukes very often when they dive.

Humpback whales are found worldwide. They occur in coastal and continental shelf waters, they are known to feed around some seamounts and migrating whales often pass through deep waters. They do long migrations between their summer, foraging grounds; and winter, nursing grounds and it is one of the most well studied species is the world. At close range, the humpback whales are easy to recognise because of the long, white flippers, the protuberances on their heads, as well as the hump on their backs.
Humpback whales were not a frequently sighted species in the Azores prior to 2014. We had a couple of encounters throughout the year but in recent years the average of the sightings have increased to 7.5% of our trips, although one must keep in mind that we are, very often, observing the same individual(s). When they encounter a good foraging ground they seem to stay there for a few days until the food runs out, which in the south of Pico has happened on a few occasions.