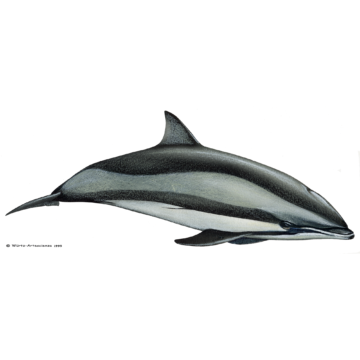 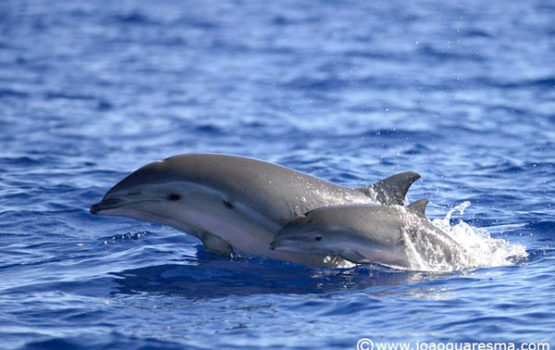 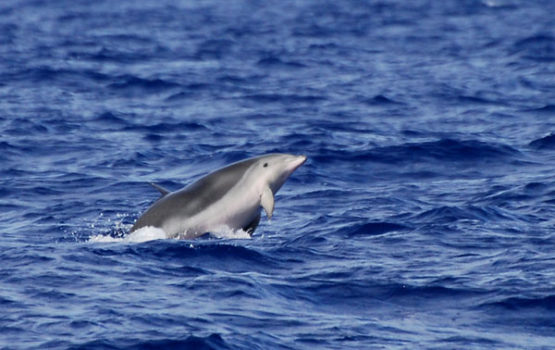 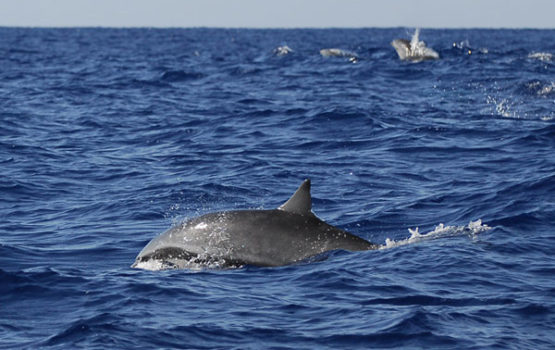 At birth, Fraser’s dolphins are about 1.0-1.1m long. Adults can grow to 2.6m long, with males slightly larger than females. Average weight is about 180kg. There are 38-44 pairs of teeth in each jaw. Lifespan is, at least, 20 years.
Fraser’s dolphins have a robust body, a short beak, and small pectoral flippers and flukes. The colour pattern is a dark, greyish-blue cape, the flanks are lighter grey, and the belly and throat are whitish (often with a pinkish tone). The most interesting feature is the broad dark stripe from the face to the anus, but this is not present in all the individuals. They also possess a dark, flipper stripe that originates at the lower jaw and merges with the side stripe. Often this unique colour pattern is referred to as “bandit mask”. The dorsal fin is small and triangular in shape, but more erect in adult males than females.
They feed on mesopelagic fish, crustaceans and cephalopods. Given their prey and habitat preference, most likely they can dive up to 600m deep. Fraser’s dolphins often swim in tight fast-moving mixed-gender groups of 100-1000 individuals, often leaping in low-angle, splashy jumps. Gestation lasts between 12-13 months. The calving interval is approximately 3 years. In some areas they are considered shy and difficult to approach; in other areas they appear to be frequent bowriders. In areas where this species is frequently sighted, they often associate with other dolphin species, especially melon-headed whales (Peponocephala electra) and short-finned pilot whales (Globicephala macrorhynchus).

Fraser’s dolphins have a pantropical distribution. It’s an oceanic species that prefers deep offshore waters, except in areas where the topography is deep close to shore. At a distance, because of its body size and eye-to-anus side stripe it can be confused with striped dolphins (Stenella coeruleoalba). The later are resident in the Azores and have a longer beak, and the side stripe is much narrower.
Until now, Fraser’s dolphins were observed by the Espaço Talassa team on two occasions. The first was the morning of August 22nd 2008. The group we encountered appeared to be shy towards boats and didn’t let themselves be approached. The following day, we encountered this species again, but this time the group, which was composed of about 50 individuals where females and calves were present, were bowriding and were very active. Given they are a tropical species, their presence in the Azores can, possibly be explained by the high sea surface temperature registered that year.