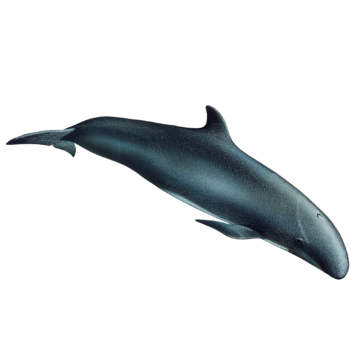 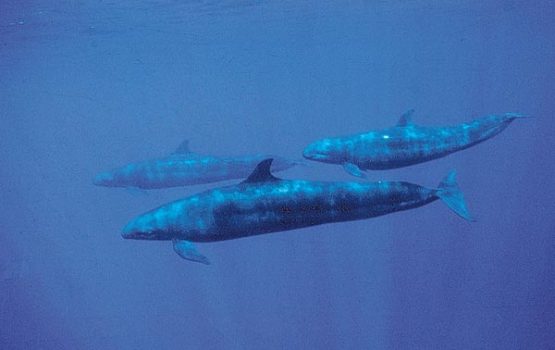 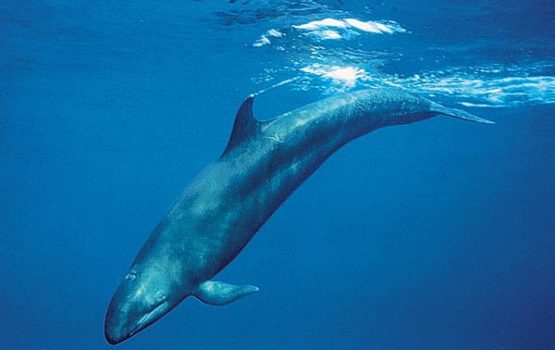 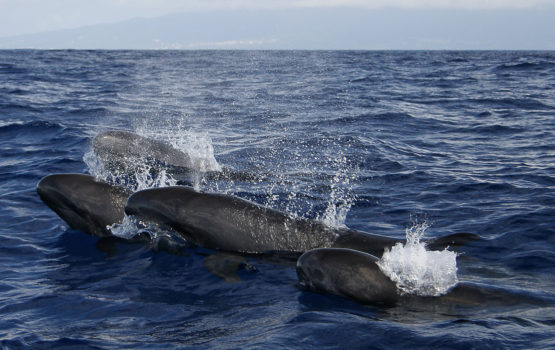 When they are born, false killer whales are about 1.5-2m long. Adults are 5-6m long, with males on average 1m longer than females and weighing up to 2000kg. There are 7-12 pairs of large conical teeth in each jaw. Life span is longer for females, and can be up to 63years.
False killer whales have long, hydrodynamic bodies; with a small, rounded head, and a long straight mouthline. The body is almost entirely dark, except for light areas on the chest. A large, anchor-shape blaze across the ventral side is variably grey or nearly white. This blaze narrows posteriorly extending to the genital slit. The slender dorsal fin is tall (can be more than 40cm high), falcate, and positioned in the middle of the back. The flippers are wider at the base and have a distinctive hump, midway on the leading edge.
False killer whales are versatile predators, known to consume a fairly large variety of prey and cephalopods. They specialize in particular types of prey, depending on the region and in the Azores, we often observe them hunting tuna. There are records of them attacking sperm whales (Physeter macrocephalus) in some areas, however these attacks can be more related with prey competition (squid), and not with them predating on these whales. They are extremely social and groups are formed with strong social affiliations between individuals. Group sizes vary between 10-20 animals, which can be part of larger schools consisting of hundreds of individuals. Occasionally they live in mixed groups with bottlenose dolphins (Tursiops truncatus). The calving interval can be long, at 5-7years. Females give birth after a gestation period of 14months and nurse their calves for, at least, 2years. Hybrids between false killer whales and bottlenose dolphins have been described. False killer whales are active, fast swimmers, which frequently bowride the waves of vessels. When encountered feeding, these animals often bring chunks of their prey to the surface and share with each other, especially with the younger individuals, their catch, and are seen passing it over mouth-to-mouth and playing with these small portions of dead prey.

False killer whales have an extensive oceanic range. They occur in all tropical and warm temperate waters, usually encountered in offshore waters deeper than 1000m. Worldwide, they are most commonly confused with pygmy killer whales (Feresa attenuata) and melon-headed whales (Peponocephala electra), but these two species do not occur in the Azores. Here, they can be confused, at a distance with short-finned pilot whales (Globicephala macrorhynchus) due to their dark bodies and large size. However, a careful look at the bulbous head as well as the wide-based, forward-positioned dorsal fins of pilot whales, allow the distinction between these two species.
False killer whales are sighted on several occasions throughout the season, in the south of Pico. The number of sightings per year has been considerably increasing, and we are having averages of 9-10 sightings per season in more recent years. These sightings can occur between March and October; but statistically, the best months are April, July and August.