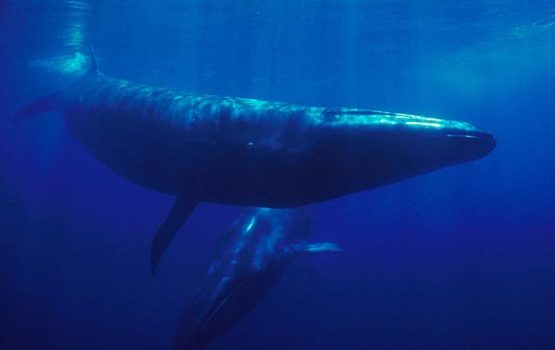 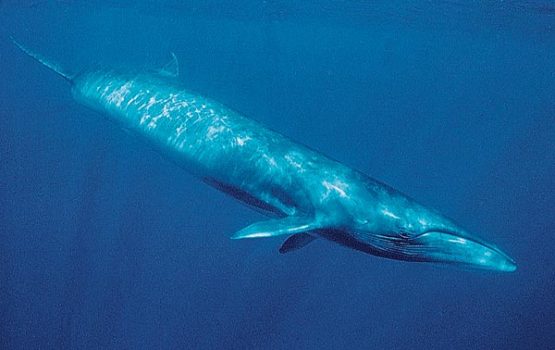 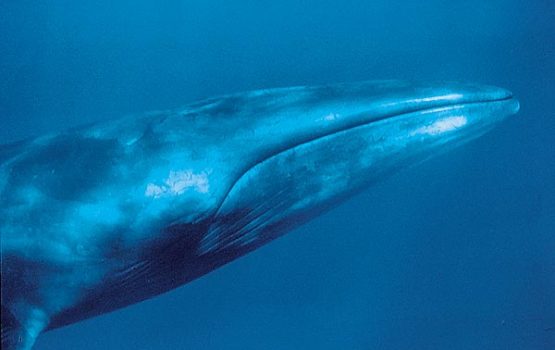 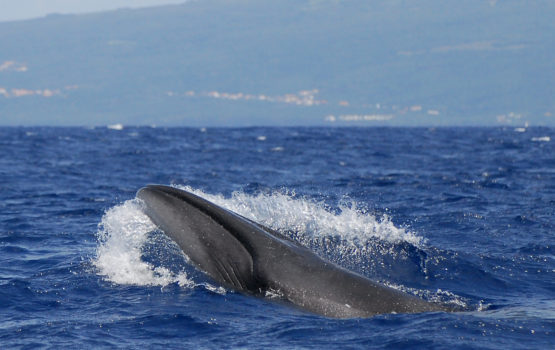 Sei whales are about 4.5m long and weigh about 700kg at birth. The maximum measurement for this species is about 20m, with males slightly shorter than females. Their weight can be close to 45tonnes. The baleen plates, numbering 220 to 410 on each side of the mouth, are dark grey or black, and are less than 80cm long. The life span is probably more than 60 years.
Sei whales have a large, streamlined body that is dark grey dorsally and white on the underside. A single longitudinal ridge forms the midline on top of the Sei whale’s head, like the majority of the other rorquals. The dorsal fin is large, prominent, and usually very falcate. There are 30 to 60 ventral pleats extending to the middle of their bellies. Sei whales have a tall (~3m), columnar blow. When diving, they tend not to arch the back as much as the other great whales.
Sei whales are more flexible in their diets, compared to other large whales. They feed on small fish, squid, krill and smaller zooplankton, such as copepods. Its feeding techniques alternate between lunge feeding and skimming through the water. In the Azores, very often they are swimming in a certain course, close to the water surface and although the animal is not seen, it leaves impressions in the water, caused by their tails not breaking the water surface (called flukeprints), that allow the whale watching’s skippers to predict where they are going to surface. Presumably Sei whales undertake seasonal movements between high latitudes in the summer and tropical waters in winter but the pattern and extent of these migrations remains unclear. Like other baleen whales, their groups are usually small and associations between individuals are temporary. Calving takes place in winter, probably in tropical and subtropical water after a gestation period of about 11-12months.

Sei whales occur in all oceans from subtropical waters to high latitudes and inhabits both shallow and deep water, although usually they occur more in open ocean. They are known worldwide for their unpredictable occurrences, with a sudden influx into an area only to disappear or be absent for years or decades. They could be easily confused with fin whales (Balaenoptera physalus), however these whales have asymmetrical colouration on the lower jaw and the blow and dorsal fin are usually not seen at the surface simultaneously. Sei whales also resemble Bryde’s whales (Balaenoptera edeni), although at close range, the later can be recognized by the presence of three rostral ridges, as opposed to the Sei’s single ridge.
This is a seasonally frequent sighted species in the Azores, seen on average, in 5% of our trips at sea. They are usually migrating through south of Pico later than the other species, and we start spotting them in April. Although scarce occurrences of this species can take place throughout the summer months, the majority of the sightings occurs in May and early June.