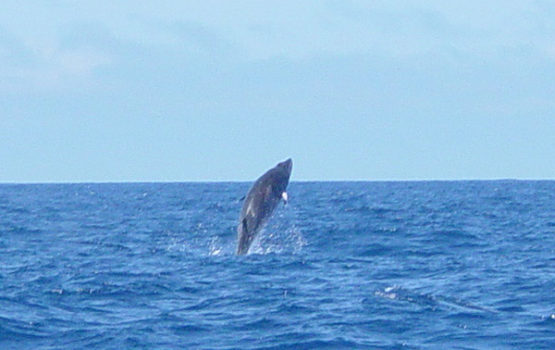 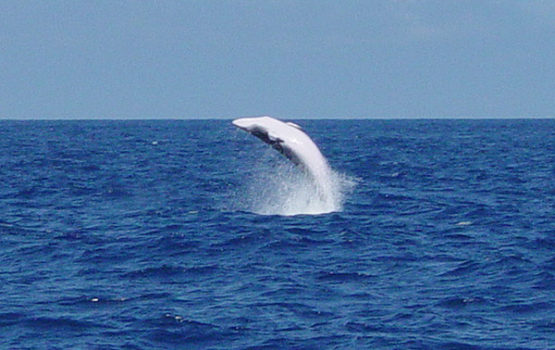 At birth, minke whales are about 2.5m long and weigh about 320kg. The maximum measurements for this species is about 10.5m, with females slightly larger than males. Their weight can be close to 9tonnes. There are 230 to 360 short baleen plates, on each side of the mouth, that are usually white or cream-colored. The life span is uncertain for this species, but probably around 50years.
Minke whales are small and streamlined, with a sharply pointed head that looks V-shaped when seen from above. The 50-70 ventral grooves end just after the pectoral flippers. They have a falcate dorsal fin that appears simultaneously with the blowholes when they surface. The blow is usually not visible. Minke whales arch they backs before a dive, but they do not show the flukes. The body is black or dark grey above, often with a grey V-shape mark crossing the back behind the head. A white band across the flipper is characteristic of the species.
Minke whales feed on a variety of small schooling fish, such as herring, capelin and sandlance. Presumably they live alone or in small, short-term associations, similarly to other baleen whales. There are some populations that seem to be segregated by age, sex and reproductive condition. Calving is thought to occur in the winter after a gestation period of about 10 months.

Minke whales occur north of the Equator, from tropical to polar waters. There is a recognised different species in the southern hemisphere. Due to their size, it is easy to recognise this species and even young calves of the larger, also dark-coloured whale species like fin whale (Balaenoptera physalus), Sei whale (Balaenoptera borealis) and Bryde’s whale (Balaenoptera edeni) lack the white flipper band present in minke whales.
Minke whales are not frequently sighted in the Azores. Espaço Talassa has 1-3 sightings of this species every year. Most of the sightings occur in spring or autumn (coincident with the migration season), although there are scarce sightings throughout the season.