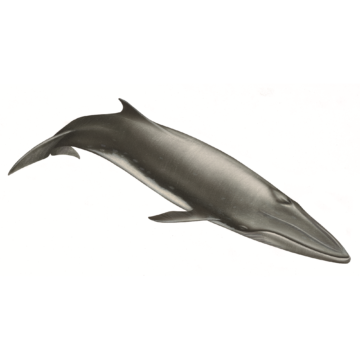 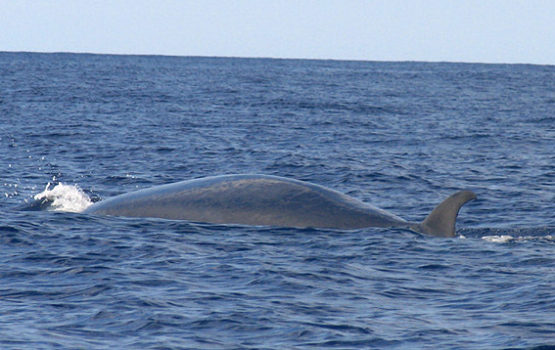 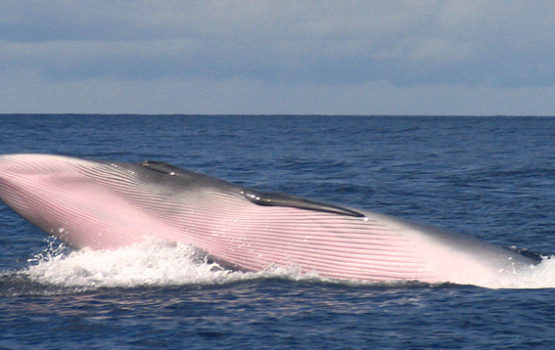 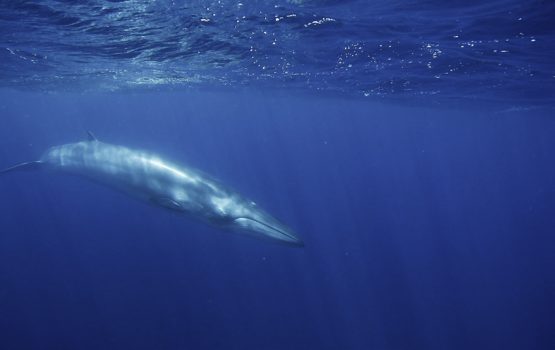 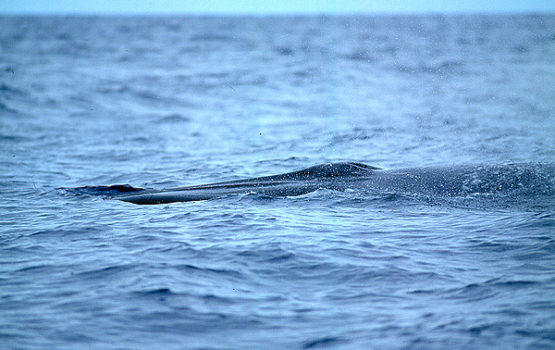 Newborn Bryde’s whales are about 4m long and weigh about 680kg. The maximum measurement for this species is about 17m, with males slightly shorter than females. Their weight can be close to 40tonnes. The baleen plates, numbering 250 to 370 on each side of the mouth, are grey, and vary in size according to the individual. The life span is unavailable for this species.
Bryde’s whales have medium to large, streamlined body that is dark grey dorsally and white on the underside, sometimes with a pinkish tone, below. Three longitudinal ridges form the midline on top of the Bryde whale’s head, unlike all the other rorquals. However, there are some individuals that don’t possess these three ridges. The dorsal fin is tall, very falcate, and usually notched on the trailing edge. There are 40 to 70 ventral pleats extending to the navel. Bryde’s whales have a columnar or bushy blow, but occasionally they exhale underwater, producing no visible blow at all. When diving, they tend to arch their backs, but they don’t usually show their fluke.
Bryde’s whales feed on small schooling fish and occasionally krill. Their feeding technique is mostly lunge feeding. Presumably they live in small, short-term associations, similarly to other baleen whales, but little is known about their social structure. Bryde’s whales are quite unique among rorquals in that at least some populations do not migrate. Instead they spend most or all of their live in tropical waters, therefore some of these populations probably lack a distinct breeding season and apparently mate and calve year-round.

Bryde’s whales occur in all oceans in tropical and temperate waters. They could be easily confused with Sei whales (Balaenoptera borealis), however at close range, the later can be recognized by the presence of one rostral ridge (rather than three). The Bryde’s whales observed in the Azores also seem to present more white on their bellies and underpart of the flanks, compared to Sei whales. Observed at a distance, it could be almost impossible to distinguish between these two species.
Bryde’s whales are not a frequently sighted species in the Azores. The first confirmed sighting for the Espaço Talassa team occurred in July 2004. We only saw them again in 2010, 2013-2015 and 2017. Although rare, the sightings usually occur in July and August. The best year was 2013, when we had 16 encounters with this species. In a more recent year, 2017, we had fewer sightings but during a longer season and we observed them between July and October. Probably this species had been seen previously in the Azores, presumably in warmer years, but the difficulty to distinguish them from Sei whales and lack of knowledge and information of the species range might have led to a misidentification of Bryde’s whales in the past.