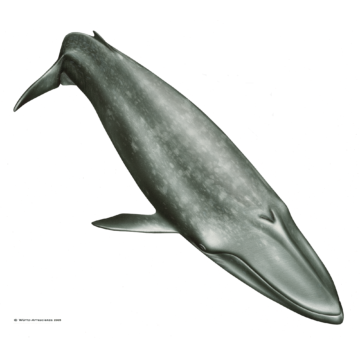 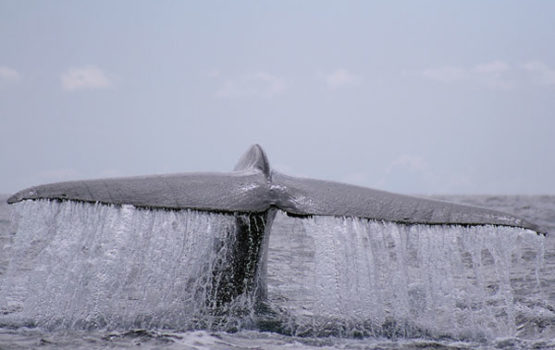 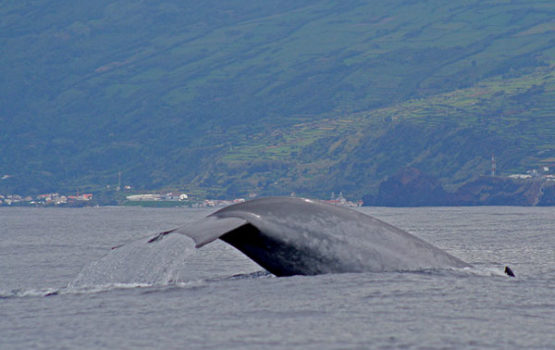 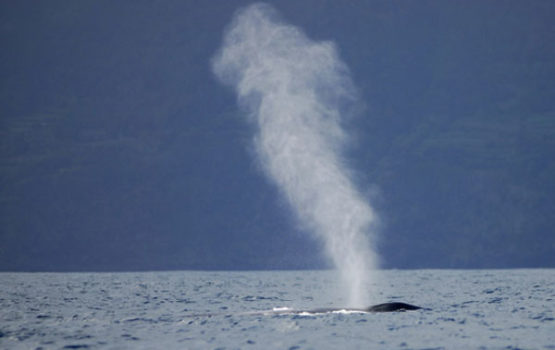 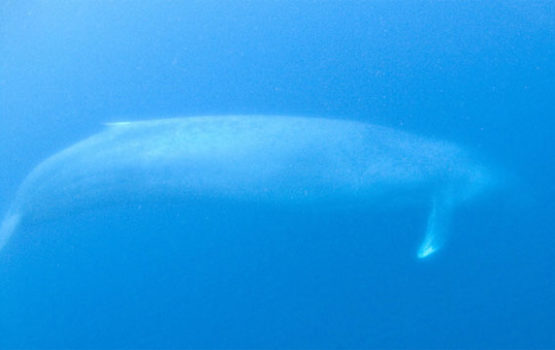 Blue whales are about 7.5m long and weigh approximately 3000kg, at birth. The maximum measurements for this species is about 30m in the Northern Hemisphere and 33m in the Southern Hemisphere, with males slightly shorter (less 2m) than females. Their weight can be close to 200tonnes. There are 260-400 baleen plates per side that are black in colour, each less than 1m long. The life span is likely more than 85years.
Blue whales are the largest animal ever known; they possess a mottled, blue-grey coloured body that appear aquamarine underwater. The mottling pattern is variable between individuals and can be used to distinguish between them. The head is U-shaped when seen from above, and flat in profile. The ventral pleats number 60 to 88 and extend as far as the umbilicus. The dorsal fin is tiny and set far back on the body, rarely seen at the same time as the blowholes when the whale surfaces. The blue whale’s blow is tall and columnar, often reaching 10m in height.
Blue whales feed almost exclusively on krill. They feed by lunging into prey schools. The flukes are often raised during a dive. Short dives are usually more common, varying between 8-15min. Like other mysticetes, blue whales tend to travel alone or in small, brief groups. They occasionally travel with other baleen species such as fin whales (Balaenoptera physalus). Calving takes place in winter, probably in tropical and subtropical waters after a gestation period of about 11-12months. Hybrids between blue and fin whales have been described. They usually migrate in spring and autumn, altering between nursing grounds in the winter and foraging grounds in the summer. Usually these foraging grounds are in cold, polar and temperate waters.

The blue whales are a wide-ranging species occurring in all oceans and inhabiting coastal and oceanic waters. Due to their size and distribution, they could be confused with fin whales, however with good light conditions it is possible to see that fin whales have darker bodies. The later also have larger dorsal fins, a feature we use to distinguish between the two species in poor light conditions or at a distance.
This is a seasonally frequent sighted species in the Azores. Until recently blue whales were sighted in 5% of our trips at sea. However, since 2014 there has been a significant increase in the sightings of these animals raising it to 16% in later years. This could be due to an increase in the number of individuals in the North Atlantic, but also due to the change in their migration routes, passing closer to shore in the south of Pico. The sightings begin in March and usually go until June, however the best months are April and May.