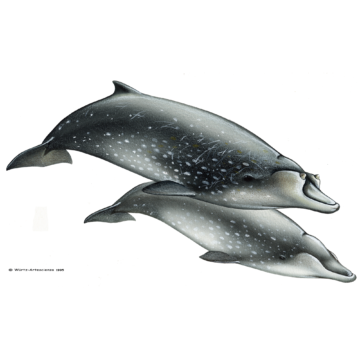 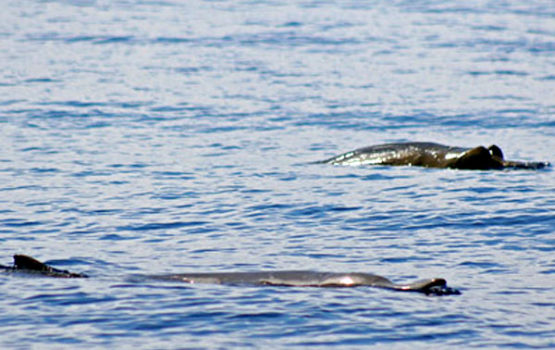 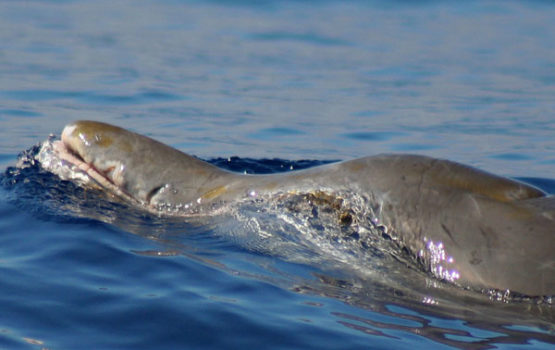 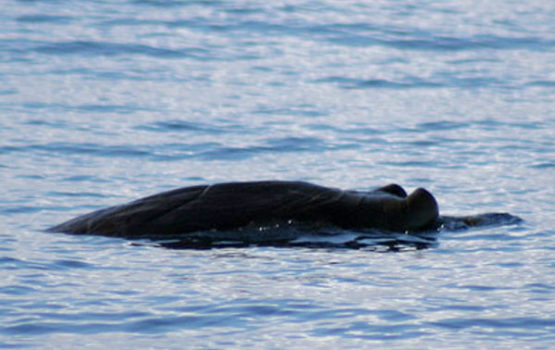 Blainville’s beaked whales are known to reach lengths of up to 4.7m and weights up to 1000kg. Newborns are probably about 2m long and weigh about 60kg. Life span is unknown for this species.
Blainville’s beaked whales have a robust body. The dorsal fin is small, and set about two-thirds of the way back on the body. The beak is moderately long, and the melon comparatively small and not very round. The mouthline is distinctive, with an abrupt, rising step at mid length. The small tip of a massive tooth erupts from each side of the lower jaw in adult males. These teeth tilt forward and rise above the upper jaw. The colour pattern is subtle and countershaded. The dorsal side is brownish or bluish-grey, changing abruptly to light grey ventrally. Adults very often present scars all over their bodies.
Like other members of the genus, they feed mostly on squid but may also take deep water fish. Blainville’s beaked whales occur in small groups of 3-7 individuals, usually one adult male accompanying a group of females and their calves. Subadults appear to stay in separate groups.

Blainville’s beaked whales are widespread in tropical and warm temperate waters worldwide. It’s one of the better studied species due to the fact that in some areas there are resident populations, such as in the Bahamas. Occurrences in higher latitudes are probably related to warm current systems, such as the Gulf Stream. Due to their unique head shape, jawline and distinctive teeth, when adult males are spotted it’s easy to recognise this species. Otherwise, at a distance, they can easily be confused with other mesoplodonts similar in size, shape and body colour.
Espaço Talassa team has observed this species for the first time in 2007. Since then, we have few occurrences (1-6 sightings) every season. The sightings of this species can occur between April and October, but are more frequent in the summer months (June to August).