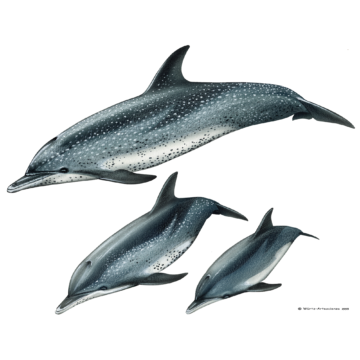 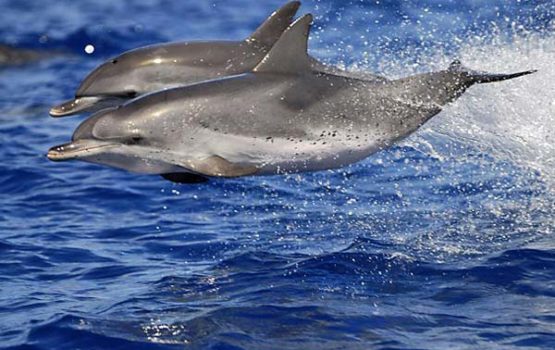 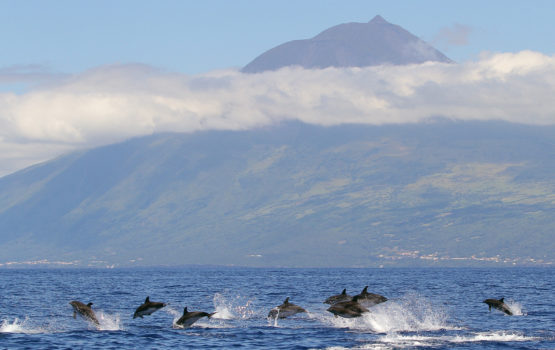 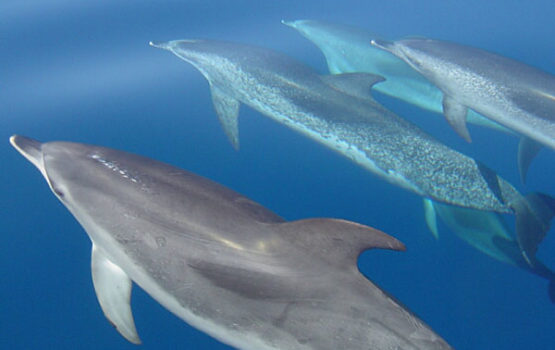 Atlantic spotted dolphins are about 1m long at birth. Adults can grow to 2.3m long, and weigh about 143kg. There are 32-42 pairs of teeth in the upper jaw and 30-40 pairs in the lower jaw. Life span is not well known, but expected to be more 30 years.
The Atlantic spotted dolphin is a small, robustly built dolphin. They have a three-part colour pattern: a dark grey dorsal cape; light grey sides with a distinct spinal blaze that curves upward beneath the dorsal fin; and white abdomens. The beak is moderate in length, rather stocky, and often white tipped. Calves are born unspotted, and dark spotting begins to appear on their bellies at the age of two years old. Spotting gradually increases with age, and adults have dark spots on the belly and light spots on the sides and back. The extent of spotting in adults is highly variable, and more offshore populations tend to be less spotted than coastal ones. The dorsal fin is tall and strongly falcate, situated at midback, usually with very little or no spots.
Atlantic spotted dolphins prey on small fish, cephalopods and invertebrates. They are mostly shallow divers, up to 60m for about 6min. Group sizes vary considerably between populations. They can live in groups of 10-50 individuals of both sexes and several age classes. Females nurse their calves for up to three years, with a calving interval of 3-4years. Resightings of the same individuals in the Bahamas indicate that some populations can be long-term residents, while others can rove large distances, looking for food. They are energetic bow riders and capable of extremely high leaps.

This species occurs throughout most of the tropical and warm temperate Atlantic Ocean. The Azores seem to limit the northward distribution of this species. They can be confused with Pantropical spotted dolphins (Stenella attenuata) and bottlenose dolphins (Tursiops truncatus). The prime is usually less robust, with slender beaks, and have a more sharply demarcated colour pattern, with a clearer separation between the dark dorsal cape and the lighter sides and belly. Also, the spotting of pantropical spotted dolphins is less dense and prominent. The bottlenose dolphins, although with similar body shapes, are a lot larger. Even a newborn bottlenose dolphin, which could be the same size of an adult spotted dolphin, would be immediately recognised due to the lack of spots.
Atlantic spotted dolphins are one of the most frequently sighted dolphin species in the Azores, however they are only present in the archipelago in the summer months. Sightings of this species can occur in May, however it is more frequent to start spotting them in late June, until late October, with a peak in July and August. Although both species of spotted dolphins prefer warmer waters, until now, the Atlantic spotted dolphin is the only species of spotted dolphins present in the Azores.